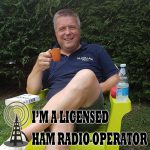 DX-ing, no matter what band, is the favorite part of this hobby for me. I think I can say I am a skilled CW,RTTY andSSB operator. This is also the order in which I favor the different modes. I love to work BIG pile-ups, but also can spend hourslistening for thatlow signal on VHF or Low Bands.

Since 1984 I am occupied with contesting also. Iam one of the founding members of the local contestgroup PI4COM .