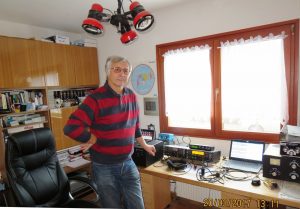 My name is Rolf. I am married with Heidi and we have two daughters. Born in 1950, my first contact with ham radio was in 1965 at school. At that time I became a SWL. Later in February 1968 I got my first license as DM3XHF.

Personally I am interested in DXing on all bands in CW, SSB and Digimodes, collecting band points and from time to time participating in contests and collecting difficult awards. I am QRV from 160 m to 2 m on CW, SSB, RTTY, JT65 and FT8. QSL is 100% sure via direct, bureau, LoTW or via ClubLog OQRS. For my DXpeditions I only reply to incoming QSLs. Please send me a mail in case of missing confirmations.