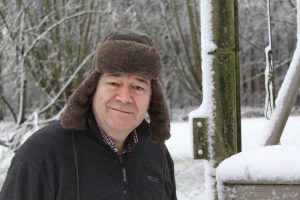 I’m married with Carine ON7LX and we have two lovely children, Aimé (1981) and Eline (1985). We are living in a old farm since more than 25 years. I’m interested in ham radio since I was a little boy. In 1979 I took part to the ham examinations and I became ON1AXQ. A few months later I passed the Morse code examination and ON7TK was on the air. The 1st of May 1980 I made my first QSO on the HF bands with Hugo EA8TE. Since that time I’ve been frequently active on all HF bands. More than 47 000 QSOs have been made since that time. My favorite ham activity is DXing on the low bands (160m & 80m) and building antennas for my station. I’m also frequently active in various contests. From time to time I’m active with my vanity call sign OT7U. I’m very happy that I can share my station with Carine and that we have a lot of fun on the station. The children are not interested in ham radio. But now we are hoping that the grandchildren will… I’ve always been active in our royal amateur radio association (member of IARU), the UBA (Koninklijke Unie van de Belgische Zendamateurs – Union royale belge des amateurs-émeteurs – Königliche Union der Belgischen Funkamateure). In 1983 I became president of our local radio club in Torhout (UBA/TRA). Three years later I was elected as District Manager for our province West-Vlaanderen. In 1995 I was elected member of the Board of the UBA. For three years I was the vice-president of the UBA and later I became treasurer (2004). Since 2007 I’m the president of the UBA. Together with the other members of the board we’re working hard for a good amateur radio association and a better ham radio in Belgium. We’re also working hard to get young people interested into the world of ham radio. Look for more information at: http://www.uba.be