Coming home from Tenerife just before new year and in the doldrums, I was happy to receive an email from Ronald-PA3EWP on New Years Day inviting me to The Marquesas Islands. I was to make up the fourth member of the team including Hans-DL6JGN and Ernoe-DK2ANN. I soon made my airline booking via Amsterdam, Frankfurt, Los Angeles, Auckland and Papeete. The following morning it was on to Nuku Hiva in the Marquesas Islands. We were to use two stations running Elecraft K3s, one with an expert 1.3 and the other with a home made 600 watt amplifier. In addition to Ronald’s hex beam we would use a vertical for 10, 15 and 20 m, a vertical for 40 m and a vertical for the WARC bands. All the verticals had tuned radials. We took 200 m of coax which we had calculated would be enough.

Voyagers from the west discovered the Marquesas between 990 and 1,100S.D. They brought the essentials for survival, crops, pigs, dogs and chickens. On landing they found parrots, pigeons and seabirds in abundance. The coastal waters teemed with fish, but the rugged volcanic Marquesan coastline, the narrow valley floors and the lack of fringing reefs made the Islands a challenging place to live. In 1595 the Spanish explorer Alvero Mendana discovered the Islands for the western World, but regular contact with Europeans was not until the arrival of Captain James Cook in 1774. With the Europeans – disease followed, emptying the valleys and destroying traditional ways of life. Contemporary Marque-sans draw inspiration from their rich historic traditions. Restored Tohua (flat areas surrounded by raised platforms) are regularly used for cultural performances and festivals. Tattoo and carving arts are being revitalised with artisans regularly incorporating traditional designs.

Nuku Hiva was different than I had expected. Being a volcanic Island it is very rugged in places with mountain peaks almost 1,000 m high. Everywhere is overgrown and the jungle extends right to the mountain peaks. We were met at the airport by our taxi driver who drove a 4 x 4 pick up.we were soon to realise that there are few cars on Nuku Hiva but everybody has a 4 x 4. The first thing that struck me was the road from the airport. It was at least 5 m wide and was solid concrete. You can imagine 80 kms of road, at least 40 cms thick of concrete. How many cubic meters of concrete were required? How was it made and laid and where did it come from? 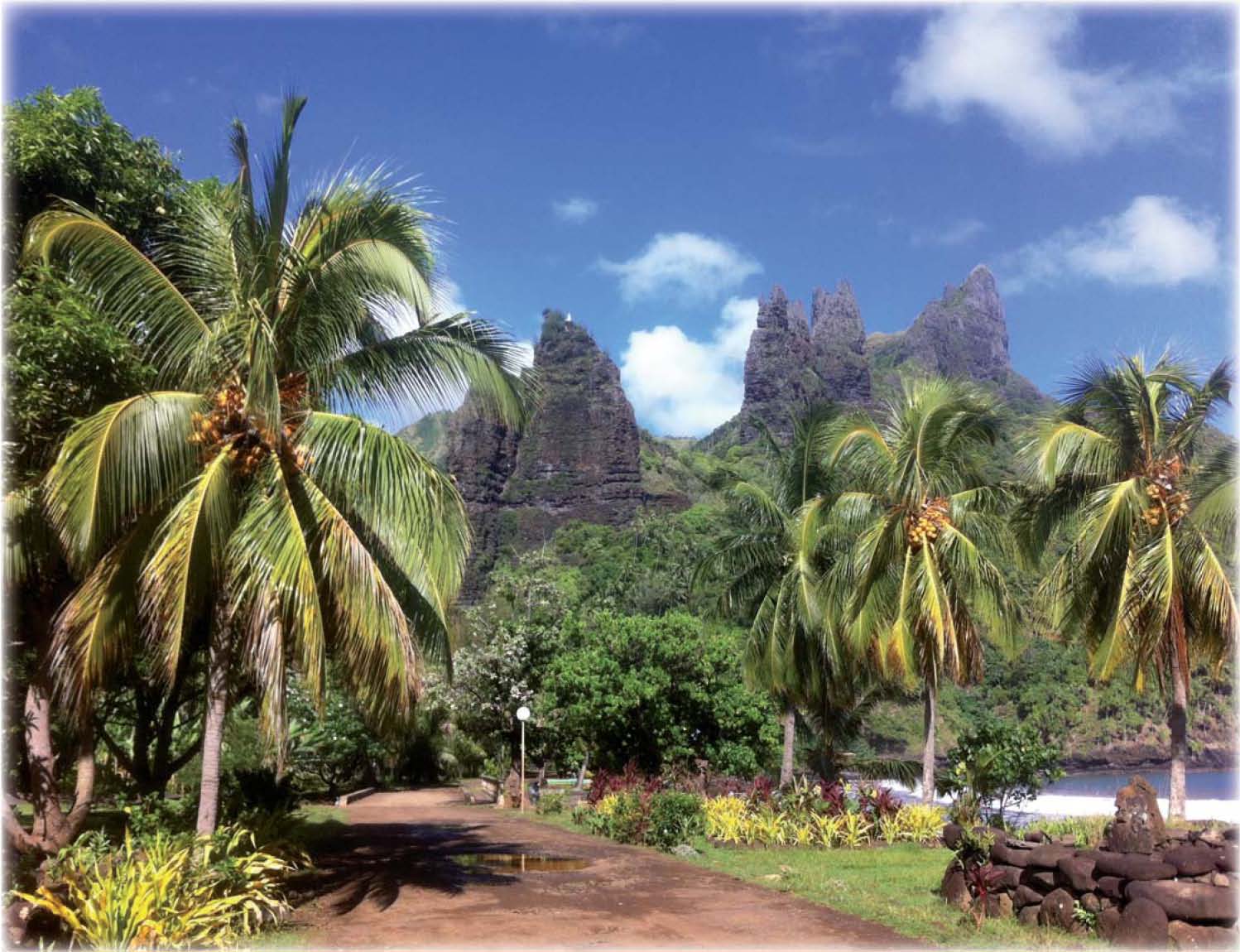 2 hours and 320 Euros later we were at our destination at Hatiheu village. The village is the only North facing village on the island located in a small bay with high mountains behind. We instantly realised that long path was impossible and only short path contacts would be possible.

Our bungalows were adequate and clean. No home comforts such as air conditioning but a bed, wardrobe, a toilet and cold shower. This was to be home for 2 weeks. The bungalows like much of the Pacific are slowly deteriorating and are badly in need of some TLC. Termites are slowly converting them to dust. At a cost of 64 Euros per night bed, breakfast and evening meal, they were expensive by any standards. However, it was a case of take it or leave it. There is no other place to stay. I was quite taken aback on the first night when I discovered that I had a lizard in my wardrobe. It shared my bungalow for the entire duration of my stay. I’m told they only eat mosquitoes.

The guy who owns the bungalows, Maurice, also owns the shop and restaurant. The island has seen better days but still has a huge French influence over infrastructure and being the second largest village on the island boasts a “town Hall”, a school, museum and a dispensary with a hospital bed inside. At Faaa airport (Tahiti) I noticed a poster for an air ambulance for medivac between islands. There is also a large Catholic Church in the village. Like all Pacific Islands, there is every airborne insect known to man, with the mosquito, the “ no-no” and the ant being the most prolific. The no-no is very small and hard to spot but are basically flying teeth. In the evening time they are prolific.

Nuku Hiva will never be short of water. There is torrential rain every day at some point. Wild horses are everywhere and every family has many children and dogs. Every morning from first light we were entertained by several cockerels who did their best to outdo each other by seeing who had the loudest cockle doodle do. They were nearly strangled on several occasions, I can tell you! 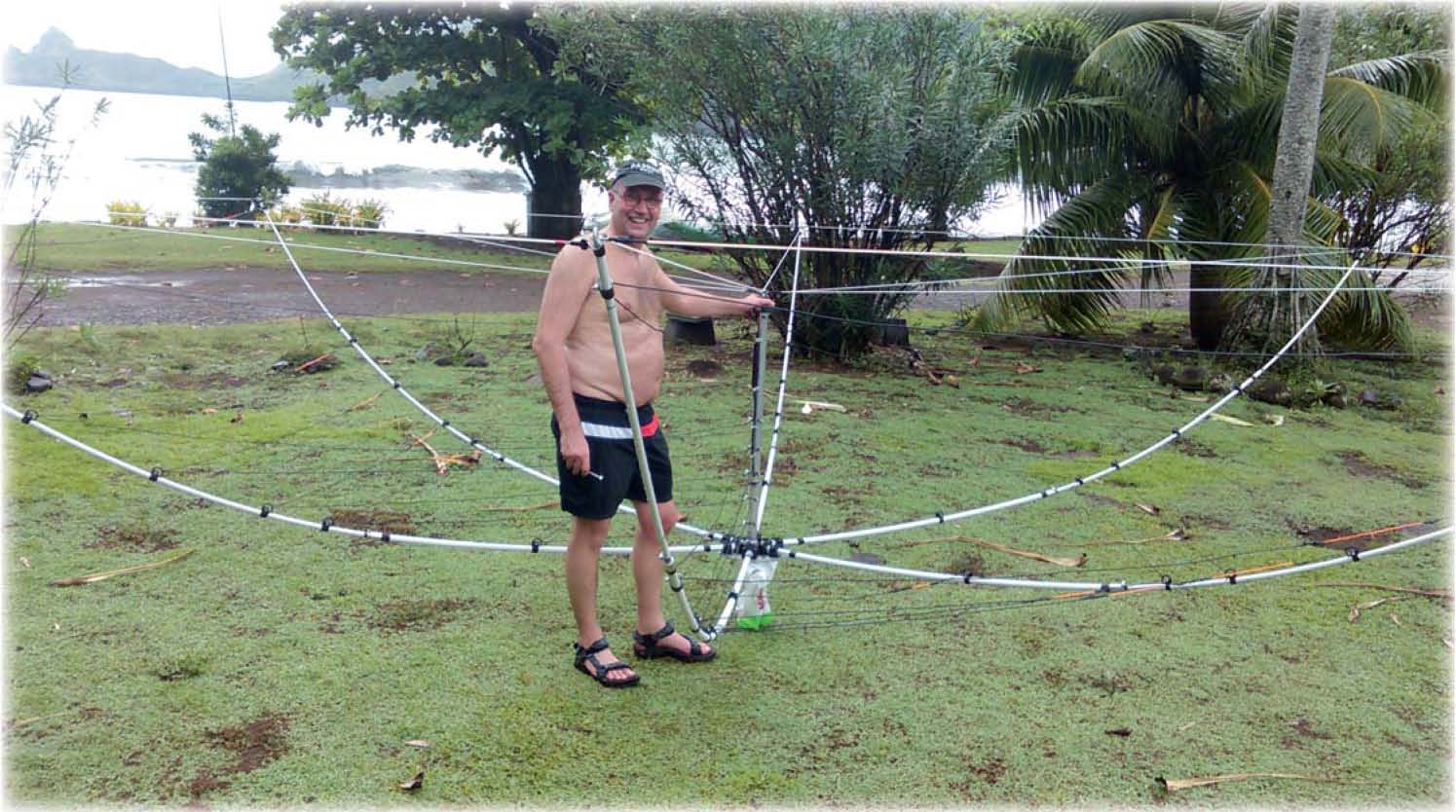 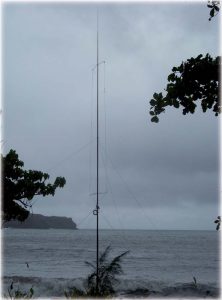 We managed about three hours work on the day of our arrival before darkness and the remainder was done the following morning. As soon as we switched on we realised we had a serious problem. There was no earth in the bungalows mains power supply and you just had to touch something to get a good jolt. We had to make an earth and bond everything to it, before the power settled down.

I had the pleasure of making the first QSO with K3WKJ on 15 m SSB. Soon we had settled into our routine. One station had the K3 with USB microkeyer and the Expert whilst the other (CW) station had the home made amp. We had no great difficulty with power which seemed quite stable considering. We had mapped out European greyline openings and tried to be on a different band each day at greyline. This involved a running battle often with the Americans who always asked the question – “why EU?”. Well you just have to look at the stats to see. Japan and North America could be worked with 10 Watts as easy as falling off a log. Many time I worked mobiles, pedestrian mobiles, bicycle mobiles and many QRP stations some running milliwatts. I can honestly say that there is very little difference in American or European pileups. Many Americans were constant callers and we had carriers on top of us as much as any DQRM I experienced from Europe. On one occasion, I asked North America to qrx till I checked for EU, suddenly four carriers came right on the frequency. On going back to America they disappeared. Another annoying trait was intending callers tuning up in the middle of the pileup sometime 2 seconds, sometimes 10 or 15 seconds.

As our signals were loud in USA and Japan we had no problems controlling the pileups, but as our signals were often weak in Europe, we had great difficulty especially on SSB. Europeans really must learn to listen and not keep constant calling, many stations repeating their callsigns maybe twenty or even thirty times before pausing for breath. At these time we could only make one qso every two minutes or do. Most undesirable but there is nothing we can do. Asking stations to spread out and transmit between specific frequencies fell on deaf ears. In Japan if the pileup was big, you just have to say “JA1 station 5 and 9”… Instantly there is silence except for the JA1s. If Europe doesn’t think we worked enough European station, they only have themselves to blame and many stations, big stations, should take a long hard look at their operating practices. We passed through the 10,000 qso barrier on to our target of 20,000 qsos. Hans opened champagne to celebrate the 20,000th qso, then it was onwards and upwards. On the last Sunday I was able to make our 30,000 qso on 12 m SSB. We had smashed our target. We hoped to keep one station operating 24/7 but in the end both stations were active at least 18 hours per day. In the morning time our time, often there was no propagation and we could repair the verticals damaged by the sea, wind and rain. That became our daily routine with the highlight of the evening meal. Often we had a choice of grilled or raw fish, curried prawns, horse steaks, curried goat, and sometimes chicken. This was washed down by the local Hinano beer. 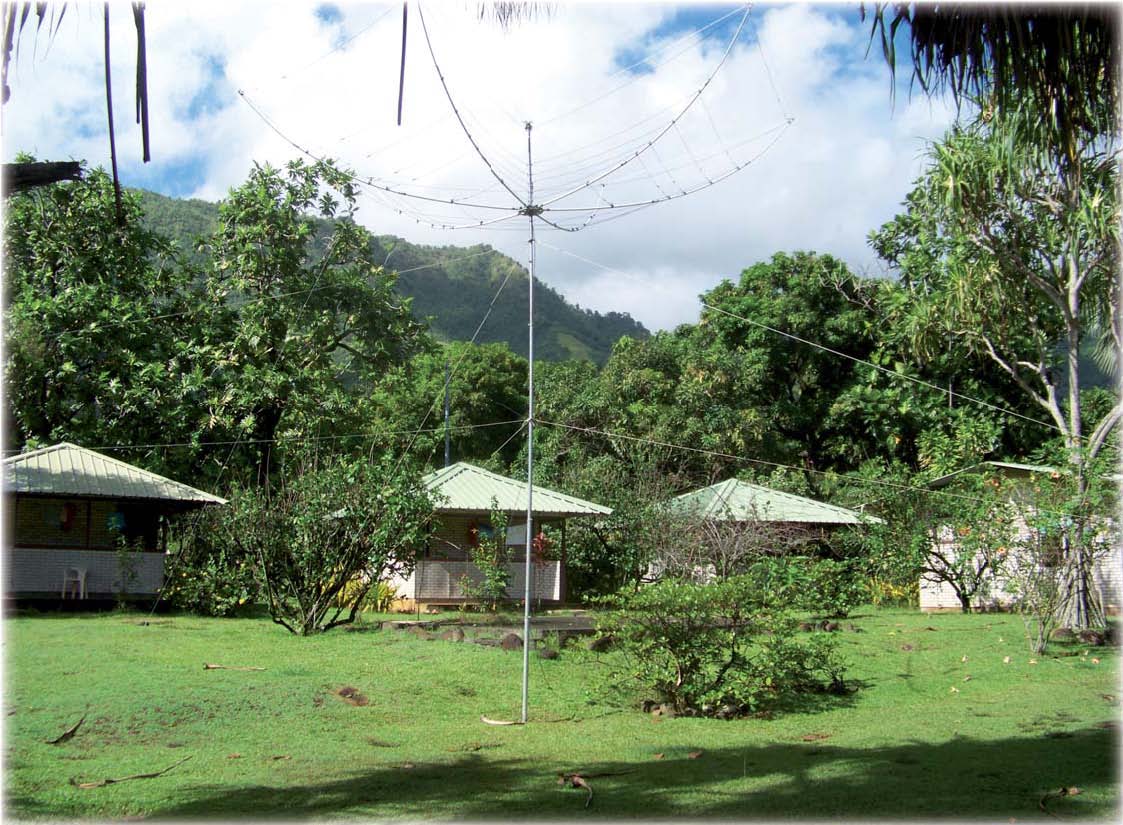 Pension “Yvonne” with our Hexbeam

Daily temperatures were always 30C+ and humidity very high. Sometimes it seemed pointless taking a shower as within 10 minutes you were soaking again.

We had no internet in the shack but it was available in the restaurant in the morning and evening if our host remembered to switch it on. So our logs were only uploaded from time to time.

Everybody in the village was polite with a bon jour or bon soir depending on the time of day, but apart from walking up and down there was nothing to do when not sleeping or operating.

I was lucky to be part of a very nice team. I think we worked well together in achieving our goals. In a way it was sad to leave this little part of the Pacific Ocean, but I did not look forward to the 48 hour trip home. We also have to remember to add not one but two days to our body calendar. 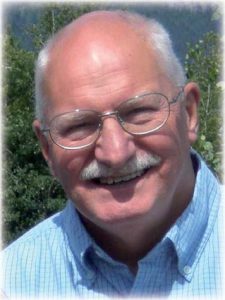 A huge thank you to our sponsors especially the EUDXF with the excess baggage charges incurred throughout the various stages of the trip. Every team member paid our own personal expenses, but Pacific travel is very expensive compared with European prices. The flight from Faaa to Nuku Hiva was over 600 Euros, per person for example and only allowed 5 kilos hand luggage. Even the K3 had to be put in the hold. At every stop our luggage was weighed, checked, and it was an argument. Los Angeles was extremely difficult as we had to get our hold luggage before being x-rayed, finger printed and photographed, just to pass through. It was just a case of wait in line. Our K3s were x-rayed many times. At San Francisco, Hans was almost asked to dis-assemble his K3. Both K3s were swabbed for explosives as were our hands.

Now that we are home we shall tidy up the logs, turn on OQRS and soon make an up load to LOTW. QSL cards will be printed within a few weeks and sent out using all the normal methods. If you ask for a buro card via OQRS, please do not also send a paper card via the buro. We do NOT require YOUR card. Here’s to our next trip! 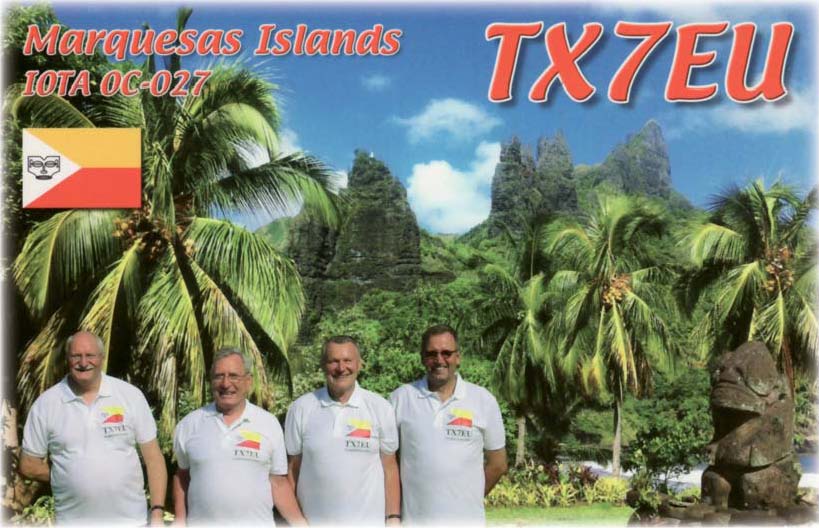