Dear members of the EUDXF,

my name is Dirk, I was born in 1964 and my callsign nowadays is PA1BD. I got involved in radio in the early 1980’s and discovered DX a few years later on the 11 meters band like many of us I think. It was a great time working DX with QRP power and a homemade HB9CV 2 elements beam. In these years I was (and still I am) an SWL and became a member of VERON who assigned the listener number NL-10355 to me.

I started to study for amateur radio license back in 1990 and succeeded in April 1991 for my C license (PE1OAV) which gave me access to the VHF and higher bands plus a special permit for 50 MHz. I’m not very intrested in VHF as my goal was HF, so I had to learn the morsecode to get my A license. In December 1992 I passed the morsecode test and received the callsign PA3GHP. Back in 1998, ham radio amateurs got the opportunity to obtain a vanity callsign. Therefore, I changed my callsign a couple of times in PA9KW, PA2C and recently since the 1st of August 2018 in PA1BD which will be my final callsign. The things I like most in ham radio is working DX, contesting, building antennas and Dxpeditioning. The modes I prefer are SSB and CW. I also like to experiment with vertical antennas near the seacoast.

In 2010 I visited a friend of mine, VK5ZMM, in Adelaide South Australia. We came up with the plan to go on IOTA DXpedition and activate Kangaroo Island (OC-139) for a couple of days and so we did with my Australian callsign VK5AUQ. It was a great experience and we’ve learned a lot. Maybe in the future there will be an opportunity to go on DXpedition again, I hope so. I have also been a member of the PI4COM Contestgroup Oude Maas for several years and learned a lot from Ronald, PA3EWP, and Alex, PA1AW, about contesting.

Now I’m working on my pretty small home station. I have built an antenna mast myself, but due to special circumstances the mast is still on the ground in the garden. Fortunately the future looks a bit better now and I can go on with building up my station. I just ordered a Hexbeam G3TXQ at Anthony’s, MW0JZE. I hope to put up mast and antenna in springtime. Hamradio is fun and I love it!

Following the success of the 30EUDXF Award whilst celebrating the 30th anniversary of the EUropean DX Foundation in 2016 it is decided to issue the 32EUDXF Award.

During November 2018 a number of Special Event Stations will be activated during the EUDXF activity month. By working these stations points can be collected for various levels of the award.

The award will be available in 4 different classes:

Please note that working the same station on the same band in the same mode is considered a dupe QSO and will not count for the award.
Any other combination counts as a valid QSO.

How to obtain this award?

Send a log extract showing the qso’s made to Alex PA1AW, the award manager.

The awards will be issued starting December 2018 after completion of the 2018 activity month. 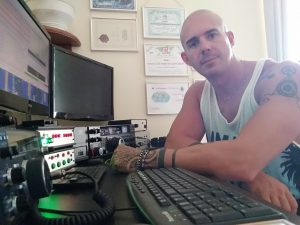 I’m actually 40 years old, born in Italy and I lived for some years in Ireland. Since 2012 I am a permanent resident of Cyprus with the call sign 5B4ALX and the special contest call H2X.

My main interests are DX, Contest and making DXpeditions.I have one radio station in Italy where I can use the call IZ4AMS and my main radio station in Cyprus which I can use remotely when travelling on the job. All the information about me, my job, my company, contest results and planned DXpeditions are available on my website www.5b4alx.cloud which has more than 5000 visitors per month.

My next DXpedition planned for 2019 will be E6ET, Niue Island. All information on my website will be shared with EUDXF for sure.