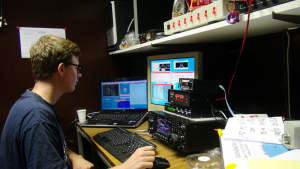 my name is Florian, PB8DX and half October till half November I held the call-sign PE30EUDXF. As I don’t have a station at home I did operate this special call only from PI4COM. I had bad luck because my amplifier broke a month before and I hadn’t had a chance to get it fixed by then so the activity remained just a 100w. We have good antennas at our clubstation so as long as there was good propagation, i could work plenty of stations.

A few weeks before I came back from my travels in south Europe and small part of north Africa (EA7/EA9/ZB and CN) and I was looking for a job back in Holland. So plenty of time to do radio and even stayed a few times overnight to do some activities on the lowbands as PE30EUDXF.

I did about 50% SSB and 50% fast digi modes and a little CW to those who requested. I remember well a nice backscatter pileup I had on 12m, the antenna was beaming towards Africa and I worked several very loud stations from Russia, as soon as I start turning the antenna towards Russia the signal disappeared. The other thing I remember was the nice pile on 160 during the CQ WW SSB. I was doing SOSB 160 PB8DX but at the second night I was out of stations, just auto-CQ’ing for possible S&P stations that would pass by. So I decided to activate PE30EUDXF for a short while, obviously as soon as I got on the cluster the response was massive, just what I needed ;).  After all I did it to support the EUDXF and had real fun doing it. Hereby i congratulate the foundation for 30 years of existence and I hope to see all of you in Friedrichshafen.