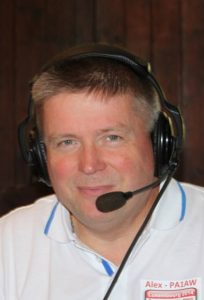 Alex van Hengel, born in 1962, lives in Heerjansdam, a small city approximately 10 km South of Rotterdam in the Netherlands.

DX-ing, no matter what band, is the favorite part of this hobby for me. I think I can say I am a skilled CW, RTTY and SSB operator. This is also the order in which I favor the different modes. I love to work BIG pile-ups, but also can spend hours listening for that low signal on VHF or Low Bands.

Since 1984 I am in contesting also. I am one of the founding members of the contestgroup PI4COM and most of the years I also was active in this group as contestmanger and Secretary General. In this role I also became national coordinator of PA6HQ, the Netherlands HQ station representing the national IARU Society in the annual IARU HF Championshipcontest.

I am also part of the LLDXT, Low Land DX Team. A team of DXers from the low lands going on DXpedition in different combinations. For many of these operations I have acted as the QSL manager. Although my private situation limited my options to operate at the other end of the pile-up I was active as LX/PA3DMH, SV9/PA1AW, SP/PA1AW, UX/PA1AW, HB0/PA1AW, LX/PA1AW and MJ/PA1AW. I am sure this list will grow over the next few years.