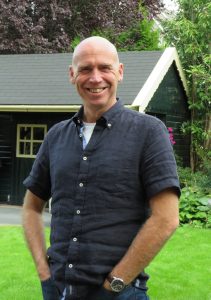 It started all very early.
Born in 1964, my interest in the magic of radio waves started around the age of 10. In 1979, at the age of 15, I joined the Dutch Amateur Radio organization VERON, obtained an SWL number and passed my novice exam the same year.
This was the start of a very exiting hobby. Shortwave and DX attracted me from day one.
Upgraded to HF/CW shortly after, and obtained the call sign PA3DSR.
My mentor was Albert, PA0ABE. I remember visiting his station very well. It was exciting to witness the regular worldwide 10m contacts on the rise of the sunspot cycle in ‘79/80, when he was using his Yaesu FL50B transmitter and FR50B receiver combination.
During these early visits I also met his daughter Monique. We became friends, and got married a little later. Not a radio amateur herself, but a huge support in every aspect.

My first profession was in line with our hobby; Radio operator in the Royal Dutch Navy.
After 5 years at sea, I changed my profession to become a Drilling Engineer for a leading company in the world wide oil and gas industry.
With these jobs, I was lucky not only to work DX, but visit many DX countries as well.

During the 90’s I was chasing DX at a high speed, and operated in many national and international contests.
In 1998, I contacted Ronald PA3EWP and discussed possibilities for Henk PA3GCV and myself to join the Low Land DXpedition team-LLDXT on a few occasions. A few trips into the Caribbean followed.  I have very fond memories of them all, but one in particular; our entrance in the 2002 CQWWDX SSB as VP2MPA from Montserrat.

In 2003/4 I was assigned to a long drilling project in Turkey, where I was able to set up a semi permanent station, and handed out thousands of TA1 contacts.
Back home things slowed down a bit after 2005.  I was only two entities away from DXCC HR#1, KP5 and KP1, when the local suburban noise/QRM started to build up gradually. Slowly I lost interest because of the high noise floor.  My logbook entries dropped to low levels over the next years, and only for the last two needed DXCC entities I took some holidays and dusted of the PA.
Being away from home for about 7 months a year and enjoying the family life in between, contributed to the lack of radio time as well.

Today, I am still working as a Drilling Engineer in the international field, but with a little bit more time on my hands. I picked up on shortwave about two years ago. Recently I replaced my trusty 20 years old FT1000mp for a 5000.  At the same time I invested in a 7 band Ultrabeam yagi. The old Force12 did a good job, but sometimes one just wants to have a new toy.
Having missed out on the last sunspot cycle, I realize that many band slots are still open to fill. So after DXCC HR#1, 8BDXCC and other achievements, I have set new goals, and I am ready to go.

This year I joined the EUDXF, to contribute to the many DXpeditions taking place. Even in these years of minimum solar activity, I hope they continue to do so.
After 15 years of absence, it was nice to return to the Hamradio confention in Friedrichshafen Germany, where old and new friend were met at the EUDXF booth and Dinner.
Hope to see you all soon either in private or on the bands