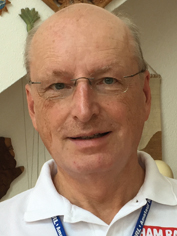 Prof. Dr. Achim Rogmann, DF3EC
Achim received his ham licence 1977 and is member (# 11) of the EUDXF from the very beginning. Since 1998 he is proud life member of EUDXF (# 11). From 1995 to 2004 he served as President of EUDXF. Since he handed over this office to Hans (PB2T) he is Member of EUDXF’s Board of Directors.
Achim is a enthusiastic DXer and operates almost in CW. He knows pile ups from both sides as he conducted DXpeditions to a number of – mostly African – countries but also to Middle East (E4/DF3EC). From time to time he is active from his second QTH in Fremantle, Western Australia (VK6ZZ).
Achim is a strong supporter of the idea to have a joint and strong European DX Foundation rather than a multitude of smaller associations.
In his professional life he also deals with bilduing the european house as he teaches European Union law at an German university.