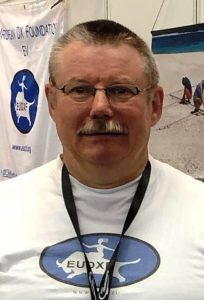 Active for the EUDXF for many years as stand manager and promoting the EUDXF.

DXing already for several years having 2 SAT DXCC awards; one with a German and one with a Dutch call, issued exact one year after each other.

Biggest tops in DX ing working VP6EU and XR0ZR among other bands also on Top Band, and then working Rotuma  3D2EU  on 80m.

Biggist flop was in Sat DX were a team was on Peter 1 island and had a Satellite window to Europa but waited until the window was open to North America and then started working. The next day a big storm destroyed the antennas….. That is a disappointment one never forgets in a life time.

Next to this EUDXF “job” I have several other obligations as an VERON official. I also give presentations about ham radio related subjects and then always promote the EUDXF.