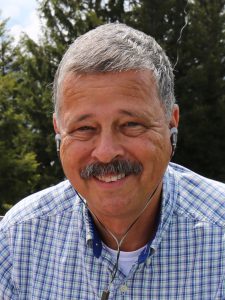 Hans P. Blondeel Timmerman, PB2T
I am active in Amateur Radio since 1974 and was first licensed in 1980 as PE1EBF. After five years on VHF and UHF I upgraded to full licence and held callsigns PA3EBT, PA7BT and PB2T. In 1997 I got involved in the work of the Dutch national amateur radio society VERON, where I served as PACC Contest Manager, HF Manager, Board Member and Vice President. In 2002 I was appointed on the IARU Region 1 Executive Committee. Initially I was responsible for meetings in ITU and CEPT. From 2008 until 2014 I served as IARU Region 1 President and from 2017 as Secretary.
In February 2015 I became Director in the Yasme Foundation and in April 2016 I was appointed as IARU Satellite Advisor. I am still active in spectrum defence, currently working on the worldwide harmonisation of 50-54 MHz.

My wife Margreet K2XYL and I like to travel, always looking for an opportunity to activate a new one. Having operated from 89 DXCC entities, of which three are deleted ones, I am still working on my “reverse” DXCC.