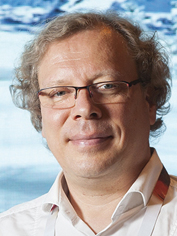 Dominik Weiel, 48 years, lives currently in Diepholz, Germany, and works as geologist in the oil and gas exploration. He got his ham radio call sign DL5EBE back in 1983 when he was 13 years old, being Germany´s youngest ham radio operator at that time.
Since then, Dom has been a passionate DXer and sporadic contester, especially on CW, being a member of DARC, HSC, VHSC, SHSC, EUDXF, CDXC and GDXF having confirmed 348 DXCC entities and 2,385 bandpoints for DXCC Challenge.
During his military service, Dom was based as a naval radio operator in Flensburg. Having worked for the german AWI polar institute after his education as marine geologist, Dom had developed strong interest in the polar regions. Scientific cruises on
board of RV POLARSTERN and RV Akademik Boris Petrov led him to rare locations in the ice. He participated in the russian-german polar expedition KABAEX to the Kara and Barents Seas from where he could be worked as R1/DL5EBE from the Amderma
polar settlement and from the arctic drift ice.
Being a member of a british-norwegian geological expedition Dom could be worked as JWØK during his field work from Spitsbergen. In the following years, Dom enriched the bands during various operations, such as 7O1YGF, 8Q7DW, CT3M, OK8EBE, T33A, HBØ/, LX/, OY/, OX/, ZL/, TF/
DL5EBE or ZL7II to name a few. Dom has travelled many times to Mount Athos in order to visit Monk Apollo, SV2ASP/A, and his brothers in Dochiariou
Monastery where he also got baptised. End of 2016, Dom was seconded to Russia for 5 years in order to work on gasfields in Western Siberia.
He lived on the territory of the German Embassy in Moscow from where he transmitted as R3/DL5EBE.
After introduction of the CEPT in Russia, Dom could also operate as RA/DL5EBE from Stary Urengoy in Western Siberia. Dom is also founder of the Antarctic Beacon Project (ANTBEAP), a beacon network running on 14,101 Khz.
He has been DX editor of the CQ DL magazine and organizer of the DARC DX Forum during the Ham Radio hamfest in Friedrichshafen for many years. Dom is working as active QSL manager for many rare polar stations from Arctic and Antarctic and he was running the Antarctica DX Net on 21,275 kHz for a couple of years.
Lately, he got interested in chasing new bandpoints for DXCC Challenge.