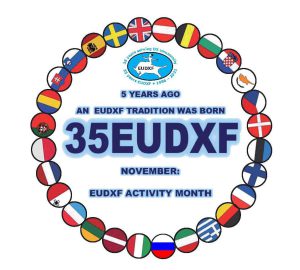 Another batch of awards were send out today and I receive many positive reactions to this years 35EUDXF activity and award. Thank you for that!

One commented that activity was lower towarts the end of the month.
I can only but confirm that. Not all special stations had a full month permit so that observation is correct but we depend on local regulations to sort this one out.

Some additional experiences from the 35EUDXF Team:

PG35EUDXF: some nice pileups on the higher bands and all HAM’s were very positive in there reactions.
I’ve worked even some stations from the south of the Netherlands, Belgium and Germany on 20M.
Spent much time as possible on the bands but during the week when I came home from my job the conditions were gone very fast so the weekends were the way to go.
Unfortunately the lower bands were a no go for me, I build a 40M endfed which was a succes but the QRM was terrible ,S9 plus plus!
Although I have worked some stations in FT8 on 40M with a indoor QRP loop and only 10 Watts it was not ideal.
I had a great time and a lot of joy during the event.
73 Dirk PA1BD EUDXF #973

By Ronald PA3EWP
This year I requested the PI35EUDXF callsign for the members of PI4COM which are also member of EUDXF.
This year we were only with 2 operators Ton PA1CC and I (and my computer) which made the QSO’s.
2 other operators of our club requested their private callsign PA35EUDXF by Alex PA1AW and PD35EUDXF by Dervin PD9DX.
It was again a great time and I was again surprised how many people were hunting for the special award.
But for me was the most importing thing to make some advertisement for EUDXF.
We operated also in 3 contest for a few hours. Most of the time we were running instead of Search and Pounce.
If you called in CW, the fist answer was a question mark and in SSB: again? So, running was the best way hi!
I did my best with nearly 4.000 QSO’s from home and our conteststation PI4COM on 70cm till 80 meters.
It was fun, and I don’t hesitate to do it again next year with PI36EUDXF hi.