I am Dervin PD9DX,one off the operators off the PI33EUDXF activity,

with this ses event callsign we have nice pile-ups,and there are always stations in the pile up that you never forget,stations from a rare DX,or small Islands,Martime Mobile stations somewhere in the pacific etc,

but the station that whas calling me last week,whas also verry interesting,it whas K3BOC / Bicycle mobile,amazing signal from his bike !

I contact later Mike by mail and he tell his station info:

Mike inform me that he work all US states and 167 countries from his bike,most contacts at 35 watts with a 7 aH SLA battery !! but now he have a new Bioenno 20 aH LifePO4 (Lithium Iron Phosphate) battery so now he can operate at higher power,usually 70 watts, for a much longer time.
att the moment that he whas calling me he whas operating at Immaculata University,where his son goes to school, near his home QTH in West Chester, Pa.

this kind off stations you will never forget,thanks for calling Mike from your Bicycle Mobile , 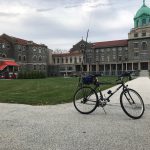 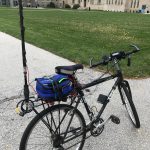