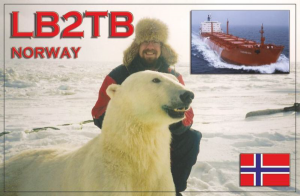 In 1983, I graduated as a Radio Officer with 2nd class certificate. After a year at sea, I upgraded it to a 1st class certificate. I was only able to sail on “the seven seas” for about 1,5 years since all Norwegian vessels started to change to foreign flag.

I then went to the navy and did my service there. I was a radio operator in the Norwegian Coast Guard (Coastguard vessel “Senja”/LBHB). I served duty as a radiooperator for NATO HQ in Oslo area. I worked 5 years in the Norwegian Ministry of Foreign Affairs as a radio officer in charge of daily communication with Norwegian embassies in more than 40 countries around the globe. I continued with the same employer as a radio technician dealing with communication both home and abroad. Total visited 67 embassies (countries). In 1994 I was engaged for 6 months as a radio operator/weather observer on Hopen Island (part of Svalbard), operating Hopen Radio/LMR on a daily basis.

I have been QRV from the following callsigns:

I work as a Radio Surveyor with Telenor Coast Radio, dealing with GMDSS (Global Maritime Distress and Safety System) on ships and offshore rigs.