As a fairly new EUDXF member (#967) I volunteered to activate one of the Dutch special event stations for the 33th anniversary of the EUDXF. I was curious to see what a special call can do compared to my ‘ordinary’ call.

When I signed up, I already indicated that my activity will be CW only, and with somewhat limited time due to the fact that I work 5 days/week and have a long commuting distance. This would mean only activity in the evenings and in the weekends. At night, man-made noise is quite an issue at my location (80 and 160m hardly usable), so in a sense it was a bit of a challenge.

Anyway, in the first two days of November I had some time and I could start off right away. The first 250 QSOs were easily made. Demand was great and I could raise some nice runs. In the weeks after I witnessed the following things.

Given the ability of my station (Mosley minibeam @ 10m, 30/40m vertical, 80m inv.L) I think I delivered the call to those who were really looking for it (in particular the 33EUDXF Award hunters). I had a few openings to North America and was called by some nice DX on 30m around grayline time. With a gross number of 1083 QSOs (35 dupes) I am quite satisfied. I recommend this activity to anyone who wants to play around with a special callsign. Next year’s Px34EUDXF stations will provide the fun again.

The Special Event Station TM33EUDX went QRT yesterday. Unfortunately the license only had a limited time so they could not be there for the full month.

With 7634 qso’s the TM33EUDX gang did a very nice job creating activity from France during the 2019 EUDXF Activity Month celebrating the 33rd anniversary of the EUropean DX Foundation.

Talking about 33 EUDXF activity….
Our French EUDXF friends at TM33EUDXF made the 100 mark on LOTW yesterday 🙂 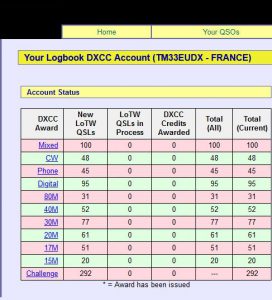